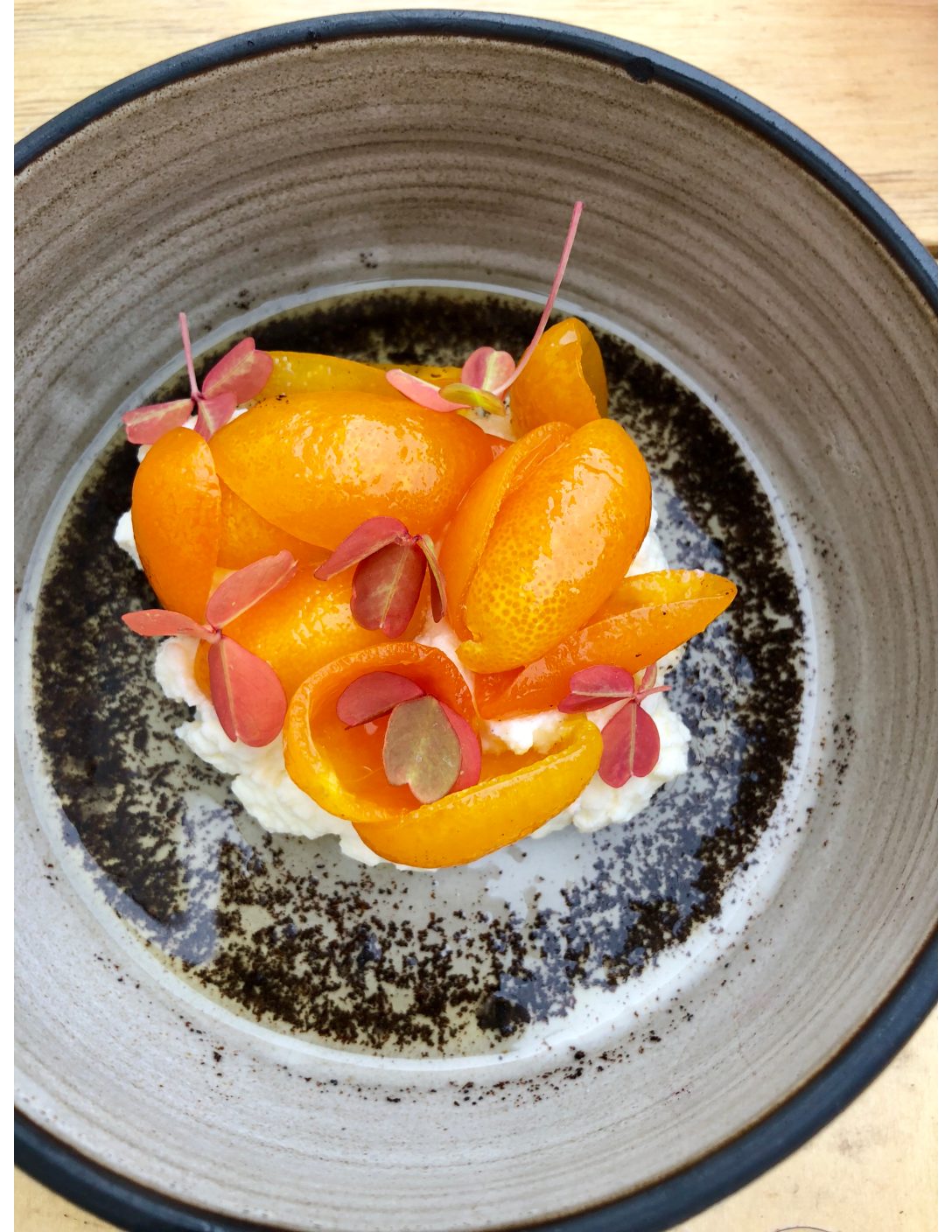 In 2005, Homaro Cantu ate a menu on the cover of Gourmet magazine and Ruth Reichl dubbed Alinea the best restaurant in America. John Mariani, allegedly pissed that his food reviewing rider demands weren’t met, ignored both Alinea and Moto and dubbed Ryan Poli’s Butter one of Esquire’s best restaurants in America. The Chicago food scene was king.

In 2018, Poli is now tearing it up in Nashville. Alinea, once number 6, and now 21 on the S. Pellegrino World’s Best list, is still ticking along somewhere at the top. Cantu is dead.

Chicago is still one of North America’s top food cities, but 2017 was a year where restaurant closings rivaled Sears franchise shutterings. Restaurateurs freaked out about the labor shortage and nothing felt like a leap or a reinvention.

While Chicago’s rent is still reasonable relative to Manhattan or San Francisco, it is not getting any cheaper.Â  If you’re Thomas Lents, formerly of Sixteen, why open in the Gold Coast, when there’s cheap acreage in the Midwestern frontier of Detroit?Â  This is not just a Chicago problem. Gavin Kaysen decamped from New York and Boulud to his hometown of Minneapolis with Spoon and Stable. Admittedly, both Lents and Kaysen also went back to their roots. As someone who was part of the massive exodus of Michigan college-grads, and who is now raising my own kids (one whose middle name is Detroit) here, I feel like many are laying down roots in Chicago rather than returning to them.

Part of the problem in Chicago is that we’re living in the era of the conglomerate. Lettuce Entertain You opens good restaurants, but very rarely great ones. I have great respect for the Melman family, but theirs is a process of refinement by many hands, a pursuit of dollars and people’s tastes rather than pure creativity.

Rich Sr. gave up on Intro and the Michelin three star L2O. He proved he could reach the pinnacle of restaurant art (if indeed cooking is an art â€“ this is worth another essay), but also realized, that wasn’t his thing. Art wasn’t as profitable as opening Hubba Bubba City, a new gum-based restaurant coming Fall 2018.

I kid with reverence. I really like Oyster Bah and Mon Ami Gabi is always fun. But, there are so many hands involved in the corporation of Lettuce. Recently I dined at S.K.Y, the new spot from Stephen Gillanders, one of the chefs behind Intro Dim Sum. I didn’t like Intro Dim Sum very much. Even dishes I liked, lobster dumplings with jade butter, felt a little watered-down with a parsimony of lobster meat. And yet, the very same dish at S.K.Y had the lightest pasta wrapper and the thickest whole lobster claw in it. Gillanders is now leading a charge, his voice unfettered, and it feels like he’s cooking the way he was meant to cook.

I can’t pinpoint one reason for the lackluster performance in the Chicago food scene, but after a recent trip to Los Angeles, I feel like I know where much of the innovation has gone.

So much of the Alinea success belongs as much to Grant Achatz and Nick Kokonas as it does to guys who ran their kitchens like Andrew Brochu, Mike Bagale, Jeff Pikus and Dave Beran (most recently of Next). The way it works in top spots after a while is the sous chef imagines a lot of the menu items and the chef gives their tweaks or approval. The sous doesn’t get credit for this, rather the dishes become Alinea or Achatz dishes. It’s sort of how the red and black leather jacket from the Thriller video (Graham Elliot is fond of wearing one) is known as the â€œMichael Jacksonâ€ jacket and not the â€œLandisâ€ jacket â€“ Deborah Landis, who also designed Indiana Jones’s leather jacket in â€œRaidersâ€, made Michael’s jacket. Celebrity has always been a vacuum. Achatz designed dishes at the French Laundry are known as Thomas Keller dishes. That’s how it works.

Beran’s fellow cooks always used to tell me â€œNo one gets more dishes on the Alinea menu than Beran!â€ Which is to say amongst all the heir-apparents to Grant Achatz, Beran was the guy. And so, had he stayed in Chicago, I might not be lamenting Chicago’s innovation as much.

But, instead he decamped to Los Angeles and opened the world’s greatest restaurant located in a food court, above an ice cream shop in Santa Monica’s Promenade. The Promenade is an open-air mall, which is to say Dialogue is located in a mall food court.

Dialogue, like Alinea, has secret entrances, a back-alley door which looks like a janitor’s closet, a service elevator, and then another door which is located six feet away from unframed metal studs and lots of undeveloped retail square footage. This last door requires you to punch in an entry code like you’re going to the bathroom at a Panera. The code is not located at the bottom of the receipt for your panini, but instead emailed to you the morning you dine.

Dave Beran knows me.Â  I was not anonymous, though I did pay my bill. I sat across from Beran and we gabbed most of the night. This is one of the best things about Dialogue. Most of the seating is at a counter which affords a view of the cooks and the tiny kitchen.Â  As the restaurant’s name suggests, you can chew the fat with Beran as he cranks a vintage duck press.

I can’t write if music is playing in the background, and Beran somehow makes deep fried French onion soup doughnuts, listens to rap, and tells me about the history of duck presses, all with high skill.

Yeah, I said deep fried French onion soup. Gruyere is draped over a croquette and caramelized and drizzled with tiny chive ribbons. This whole set-up is served on a candelabra that would make Liberace squeal. Some of the candleholders hold croquettes, and some, candles made by Beran and his crew from leftover rendered fat and herbs. Beran says some people try to eat the candles. As someone who has often thought about going to town on an apple spice jar candle from Yankee Candle Company, I understand.Â  But, anyway, the croquette blows up in your mouth with French onion soup. You will never want it served in one of those hippie ceramic crocks again.

There are like 20 courses. I say â€œlikeâ€ because I am bad at math when sober. I drank a lot when I visited Dialogue thanks to Jordan Sipperley’s (yep, his real name â€“ born to sommelier, yo) killer pairings. Because of Sipperley’s good work, I went out and bought a whole bunch of Vilmart Champagne for personal consumption when I came back to town.

All the dishes are fantastic. I often say stuff like a great taco is equal to any great pre-fixe meal, and that’s true in the way that all orgasms are good orgasms. But, there is a secondary, or maybe that’s a primary pleasure, available too, a million different kinds of foreplay, some terrible and some transcendent to get to a denouement. What I forget (because who, other than Phil Vettel, J. Gold, and Pete Wells, have the expense accounts to eat at this level regularly anymore) after eating at a place like Dialogue, is that chefs like Beran, Keller, Achatz, Boulud, Redzepi, etc. are top level (food) porn stars, professionals who have mastered a million tricks to get your palate off.

Besides cost, one of the reasons I don’t eat many long tasting menus anymore is that at some point you’re so full you want die. Due to the enormous wine pairing, my wife once hurled the remains of her French Laundry meal in to the porcelain bowl at one of Napa’s finest bed and breakfasts. Beran’s tasting menu leaves me full, but not burdened.

Also, I never lose interest. He weaves in sweet courses with the savory courses instead of leaving dessert only at the end. Escoffier sort of did this. But Beran does it more aggressively.

One of those sweet courses features a persimmon fruit roll-up. The following course is trout with persimmon sambal. Beran says, â€œDo you still have persimmon stuck in the back of your teeth?â€ I do. He says, â€œGood, it’ll pair well with the next course.â€ Beran has found a way to turn a bug in to a feature. He planned the obsolescence of the last course at the right time. Many dishes possess at least one flavor from the dish before it, a linkage which keeps both your brain and your tongue engaged.

The best thing I ate was a piece of braised pineapple which accompanied the duck press course. While the sauce made from pressed carcasses was a sanguinary delight, it was the tiny slice of pineapple soaked in rum bursting with pie spices, a taco al pastor’s soulmate, that slayed.

People will want to know if Dialogue was better than Vespertine, Jordan Kahn’s polarizing modern restaurant, also located in Los Angeles. I didn’t have enough money or time to find out, but look forward to finding out later this year.Â  What I can tell you is that Vespertine’s sister restaurant, the hipsterist of all hipster cafes, Destroyer, might just be the best breakfast spot in America.

Kahn serves modernist pre-fixe level a la carte dishes like thick homemade labneh yogurt teeming with kumquat skins and bursting with orange blossom perfume. There was some stuff going on with blueberries I still don’t even understand, except that it tasted like tangy pie when slathered on toast. There is also avocado confit dusted with burnt onion (Beran also serves a course at Dialogue with barrel-aged burnt onion, maitake mushroom and rosemary that is, apologies to Outkast, umami bombs over Bhagdad).

This is all fine, but also problematic. Kahn, too worked at Alinea, just like his buddy Alex Stupak who decamped to New York to open Empellon. I wish both of them had stayed in Chicago.

The night I ate at Dialogue Beran told me, â€œL.A. now reminds me of Chicago in 2005. Vinny [Dotolo] and Jon [Shook] are doing edgy things like Paul [Kahan] was doing with Publican and Avec. Puck was kind of pioneering like Trotter. This place is ready to explode.â€

That’s great for L.A., but too bad for Chicago.